Why Calcium Is Important for Children and Bone Health 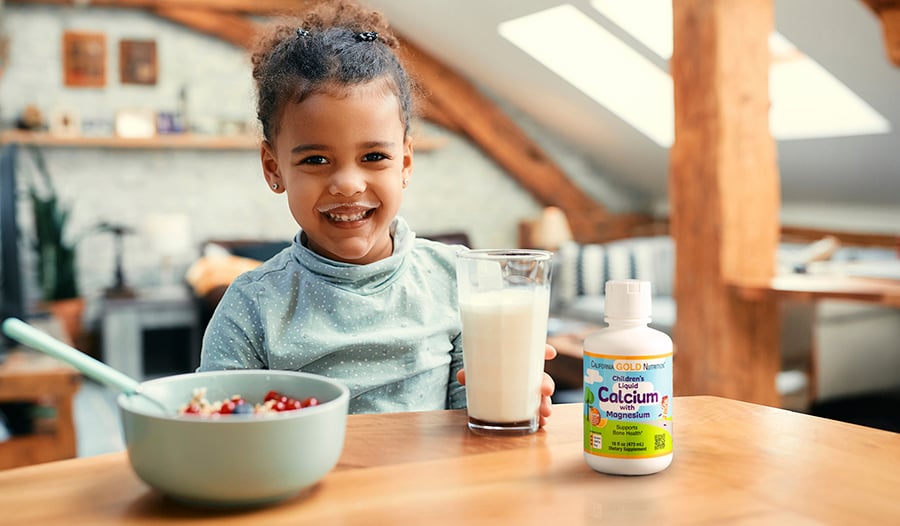 While there is often a focus on calcium intake in older adults to prevent fractures, bone loss, and osteoporosis, calcium intake in children is arguably more important for longevity and long-term bone health than calcium supplementation in old age.

During childhood and adolescence, bones grow and eventually reach “peak bone mass.” This process is reliant on calcium intake. In fact, around 99% of all calcium in the body is found in the bones, and this calcium has to come from what we consume.

During adolescence, there is a three- to four-year period of peak bone-building where 40% of the adult bone mass is deposited. In girls, the peak is around 12.5 years of age, while in boys, the peak occurs at around 14 years of age. During these years, calcium demands are high, and if inadequate calcium consumption occurs, overall bone mass and strength may be compromised. This can lead to increased risks for osteoporosis and fractures later in life. If calcium intake is maintained, risks for bone issues can be minimized in adulthood.

Late childhood and early adolescence present a window of opportunity to build strong, healthy bones. If that opportunity is missed, peak bone mass can be compromised, with individuals having a greater propensity toward bone problems and bone loss as they age.

Other Benefits of Calcium

Beyond bone health in growing children, calcium is important for other reasons. Some of the latest data suggest that increased calcium modestly reduces blood pressure, especially in younger individuals. While the changes are modest, even small reductions in blood pressure can translate into significant health improvements. Lowering blood pressure by just two points can reduce the risk of death from stroke or heart disease by 10% and 7%, respectively.

As a nutrient, calcium is utilized for muscle contraction, nerve conduction, blood clotting, and numerous signaling systems. The mineral is necessary for normal physiological function, and due to the body’s needs, it is tightly regulated to maintain a reliable supply.

For both boys and girls, calcium recommendations from the National Institutes of Health are the same through adolescence:

However, worldwide, calcium recommendations vary by population. In Europe, recommendations for ages 1-3, 4-10, and 11-17 are 450 mg, 800 mg, and 1150 mg per day, respectively. Some data is even suggestive that Asian populations have better calcium absorption and do not require as much as other populations, which could reduce requirements for calcium in some Asian individuals.

Calcium recommendations are the highest throughout the lifespan from ages 9-18. Unfortunately, a lot of children do not meet these calcium recommendations. In the United States, teenage girls are most likely to miss recommendations, consuming 27% less calcium than recommended. In Asia, some estimates suggest that over 96% of children are not consuming adequate calcium. From the sparse data available, calcium consumption in Africa and South America appears to also indicate consumption levels around half of current recommended levels, putting numerous children at risk of low calcium intake and poor bone development.

Interestingly, however, there is a bit of a paradox. In many countries with lower calcium consumption, rates of osteoporosis and bone fractures later in life are lower. Termed “the calcium paradox,” it’s not fully understood why specific populations seem more resistant to bone problems, even with lower calcium consumption. It most likely has to do with the complexity of the different factors that influence bone loss as we age, including other dietary and lifestyle components.

To meet calcium dietary requirements, foods high in calcium need to be consumed regularly. Some of the richest sources of dietary calcium include:

While dairy foods are often highlighted for their role in calcium intake, other foods, including nuts and seeds, vegetables, fish (containing bones), and whole grains, can also be reliable sources.

If children are not meeting their calcium needs through diet, supplementation can be considered. Studies have found benefits for building bone with calcium supplements, although benefits in one study were increased when combined with physical activity and at earlier stages of puberty. A study on calcium citrate-malate supplementation found an increased bone mass of 24 grams yearly in adolescent females. The authors concluded that supplementation might help prevent future osteoporotic events.

When it comes to calcium consumption and benefits, calcium is often emphasized alone, disregarding information around other vitamins and minerals that work in concert with the mineral. Vitamin D and magnesium are also critical to consider for bone health and in conjunction with calcium intake.

While consuming enough calcium is essential, vitamin D is also needed to absorb that calcium and utilize it in the body. A deficiency in either calcium or vitamin D during childhood can cause rickets—a condition in which bones are poorly mineralized and have low bone mass. In children with normal vitamin D levels, supplementation does not necessarily confer benefits, yet in children with low vitamin D levels, vitamin D can be beneficial.

When it comes to bone health, calcium often steals all the thunder. However, magnesium, another crucial mineral that is often under-consumed, is also critical for bone health.

Studies show that magnesium is commonly deficient. In some populations, upwards of 50% of individuals do not consume enough of the mineral. And yet the mineral is crucial for numerous functions throughout the body, including bone health. A small study on adolescent girls that were consuming low levels of magnesium found that magnesium supplementation significantly increased bone mass. In the study, magnesium supplementation improved bone mass most significantly in the hip. Studies later in life have also shown that magnesium has bone-sparing effects, helping to decrease bone loss as we age.

Calcium is a critical nutrient for developing bones from childhood through adolescence. Unfortunately, numerous children worldwide do not consume the required calcium from their diet, contributing to decreased bone mineral density and mass during development. This decreased bone mass can put them at risk of bone loss, osteoporosis, and bone fractures as they grow older. Calcium supplementation can help improve bone development when needed, as can the addition of vitamin D and magnesium when deficient in the diet.

Previous Article
How to Maximize Breast Milk Health, According to a Doctor
Next Article
The Ultimate Hydrating Skincare Routine

Bone health is critical to overall health as we age. Fortunately, a number of supplements—including calcium and zinc, among others—appear to support healthy bones.

A Natural Approach to Bone Health

A newborn baby has 280 bones, throughout childhood many of these bones fuse together, resulting in a total of 208 bones in adults. Composed of water (10-20%), minerals (70%), and collagen (10%), bones are their strongest when a person is between the ages of 25 and 35. Keeping them healthy is vital.

How to Manage the Dreaded Stomach Bug in Children

Acute Gastroenteritis (AGE) in children, commonly referred to as the “stomach bug” by frustrated parents everywhere, is most often caused by a short list of viruses. The usual suspects in this illness each have their own peak incidence during the year but can also be found in random outbreaks.