Your preference has been updated for this session. To permanently change your account setting, go to My Account
As a reminder, you can update you preferred country or language anytime in My Account
Email a Friend!

Your email is being processed.

Sorry, this product is no longer in stock.

Sorry, this product is no longer in stock. 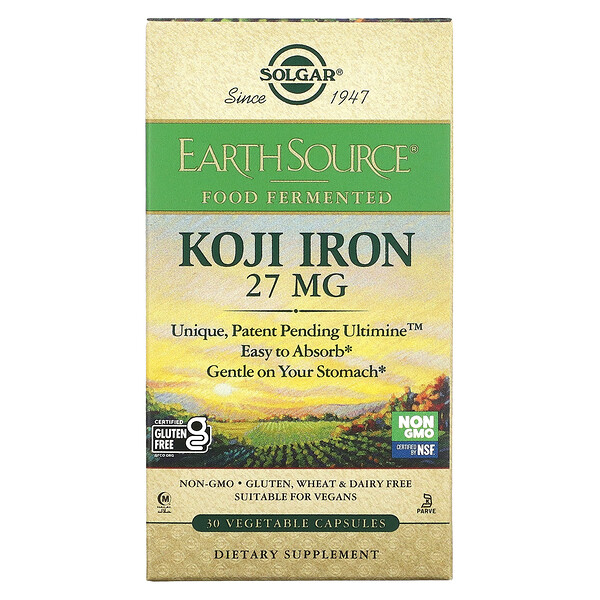 Strongly tied to Japanese culture for more than 2,000 years, Koji has long been used in the production of vinegar, soy sauce and miso. Koji, a Japanese term for "cultured grain", is derived from a starter culture grown on rice. As the Koji matures and ferments, iron is introduced to the mix and becomes naturally stored within the cells of the Koji culture. It is later harvested to provide a gentle, enriched source of iron.

Based on concerns over the potential fast rate of iron influx that may result in oxidative stress, a slow-release yet readily bioavailable source of iron is desirable.♦ This slower-release iron is clinically shown to have a slow and steady absorption rate into the blood stream compared to the most commonly used supplemental source of elemental iron.

Every living organism requires iron for a number of essential functions. This trace mineral promotes normal red blood cell production, plays a key role in energy utilization and neurotransmitter synthesis and is an important component of hemoglobin, the protein that carries oxygen needed to fuel cells. Getting the correct amount of iron is very important. Continued inadequate iron intake, if not carefully monitored can lead to iron deficiency anemia. In fact, recent U.S. Dietary Guidelines identify iron as a nutrient of concern for women of child bearing age.

Solgar® Food Fermented Koji Iron is different...delivering Ultimine™, a unique, patent pending form of slower-release iron. Koji Fermented iron is made by a natural process where iron is introduced into the Koji material and the iron is actually absorbed and stored by the Koji culture. Through this food-based fermentation, Solgar® Koji provides a slower released form of iron that is gentle to the stomach.

As a dietary supplement for adults, take one (1) vegetable capsule daily, preferably with a meal or as directed by a healthcare practitioner.

Accidental overdose of iron-containing products is a leading cause of fatal poisoning in children under six. Keep this product out of reach of children. In case of accidental overdose, call a doctor or Poison Control Center immediately.

While iHerb strives to ensure the accuracy of its product images and information, some manufacturing changes to packaging and/or ingredients may be pending update on our site. Although items may occasionally ship with alternate packaging, freshness is always guaranteed. We recommend that you read labels, warnings and directions of all products before use and not rely solely on the information provided by iHerb.